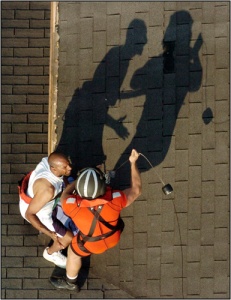 Aviation Survival Technician (Rescue Swimmer) Jason Jennision was one of the air crew who flew up from Clearwater, Fla. He was awarded the Coast Guard Air Medal for saving 75 lives in 23 hours, 13 of those hours at night.

It was projected to hit somewhere between Gulf Shores, Ala. and Houston – a stretch of about 500 miles. We wanted to be as close to the impact as possible before landfall, or it would be too late to do any good. Three teams were positioned at three locations throughout the Gulf region. My team set up in Mobile, Ala.; a second team set up in Alexandria, La.; and, the third team was in Galveston, Texas. Determining these locations, with the uncertainty of landfall, wasn’t exactly science, but it was our best guess. If we guessed right, at least one team would be standing and able to move in to set up public information operations in the impacted areas after landfall.

By the time Katrina was about 10 hours out, the national hurricane center had narrowed landfall projections to Mississippi and southeast Louisiana.  Public anxiety was rising as all eyes were on New Orleans.

The events that unfolded are well documented, as are the failures – real and perceived – of the federal response and local miscues that became the focus of nearly every story within days of landfall. The news was bad and kept getting worse.

Yet, in the midst of the criticism, the Coast Guard stood out as the lone shining star of a blemished federal response effort.

This perception was no doubt fueled by near instantaneous imagery of our helicopters hovering over flooded neighborhoods and our rescue swimmers hacking through rooftops with axes to get at survivors stuck in attics.

In reality, the sky was filled with more than our helicopters in those first days. We saw local law enforcement, air ambulances, Marine Corps, Navy, National Guard – even news helicopters – buzzing around the city looking for survivors. There were so many aircraft in such a limited airspace, our pilots would later say it was a historical feat of aviation skill that no mid-air collisions occurred.

So why did the Coast Guard become the silver lining of the federal response to Hurricane Katrina? Because while ours wasn’t the only compelling story to tell, we seemed to be the only ones telling a story. That has been one of the Coast Guard’s core crisis communication philosophies – tell the story.

Actually, there were a lot of things we were doing right when our sister agencies were struggling, but I’ll narrow it down to those that apply to all successful communications during response operations.

1. We were the best source of information
Were were the only federal agency to position public information teams in potential impact areas before landfall. The story can’t be told accurately from behind a desk hundreds of miles away from the scene and information from that far away doesn’t help people impacted at ground zero.

2. We were proactive
We established relationships, primary and secondary lines of communication with local media and emergency operations centers, before the chaos – because the aftermath is not the time to be establishing those contacts.

3. We were accessible
It’s standard operating procedure for Coast Guard communicators to issue advisories with safety messages and emergency information in the days leading up to landfall of a hurricane. This establishes us as a reliable source of information and gets our contact information out there to people who will need it after a storm hits.

4. We were embedded in operations
Coast Guard photojournalists were on the first aircraft flying into the city after landfall. The air crews that did not have photographers on board had hand-held video cameras and hoist cameras mounted to the airframe. This meant we were the first to get imagery of the response to both rescue planners and the public.

5. We were transparent
We put crewmembers coming off the front line in front of the camera or on the phone with the media – not the commanding officers, not the admirals, but the flight mechanics, pilots and rescue swimmers.

These factors drove the media to us. This allowed us to tell our story. This helped us become the redeeming face of the federal response.

Which sets me up nicely to point out the most critical factor to our success – in fact, without it the first five might have been for naught.

6. We did the right things, right
Our operators and air crews did the right things, the right way, for the right reasons, which meant we, as communicators, didn’t need to worry about how our part of the federal response would be perceived. We declined the over-flights, we turned down Oprah and, while the President was obviously welcomed aboard, we would only put helicopters behind him if they were unable to fly for mechanical reasons.

You see, even with all the solid communication fundamentals in place, there was no way we could adequately explain why a Coast Guard aircraft was flying a senator around when it could be rescuing people in New Orleans instead. There was no way we could say we were dedicating “all available resources” to the rescue effort if perfectly good helicopters were staged behind the president during a media briefing. We wouldn’t be able to explain it and we were never put in the position to try.

Epilogue
In the coming weeks we would rotate in and out of the region several times as the Coast Guard and EPA responded to what was then the second largest oil and hazardous chemical release in U.S. history since Exxon Valdez. My team was in the disaster zone from Aug. 27, two days before landfall, until Feb. 8. Rarely during that time did we have to buy a cup of coffee, pay for a drink or manage hostile members of the media or public.

We were awarded the Presidential Unit Citation, the Armed Forces Medal and the Special Joint Operation ribbon as well as individual Achievement and Commendation medals for our efforts.