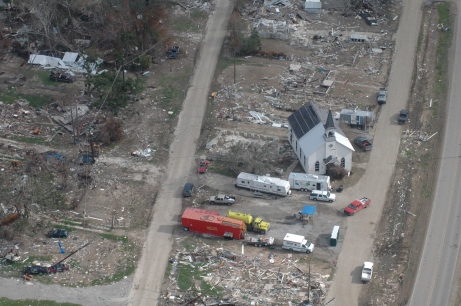 I’d love to change the world
But, I don’t know what to do
So, I’ll leave it up to you

Note: This piece is the second of four we’ve put together for the 10-year anniversary of Katrina. Paul and I reported to the U.S. Coast Guard’s Public Information Assist Team the summer of 2005. Our team was in the disaster zone from Aug. 28, the day before landfall, until Feb. 8.

Yesterday Paul wrote about why the Coast Guard was perceived as, well, the most awesome part of the federal response to Hurricane Katrina. Paul’s and my response to that disaster wasn’t the first, or last, time we found ourselves working at a “big one.” There were still plenty of lessons learned, though (I skimmed our team’s after action report this week – 22 pages long!).

Since Paul focused on the crisis comms issues from the response phase of operations, thought I’d tick off some lessons learned (or reiterated) from Katrina (not all 22 pages) that can apply to anyone preparing to respond to disaster. By anyone, I mean anyone – we worked with thousands of people in the months we were on scene, and plenty of them were civilians from non-response organizations filling roles with incident management teams.

Have your go-bag really ready

An almost ready go-bag isn’t ready – the whole point is to have something you can grab when you’re out the door right after being notified that it’s “go time.” Stock it now with everything you’ll need to work and live in almost any situation. We packed 7-day supplies of everything, from underwear to rechargeable batteries! Space and weight concerns will force you to compromise and focus primarily on “must-have” items, but throw in a few small “nice-to-have” items, as well (I never regretted having a fully loaded mp3 player during time spent in rented SUVs driving from “command post x” to “staging area y”). At a loss for what to pack? Imagine that you have to live and work, in the time and place that you’re reading this, for the next week, but every single store will be closed and power and water will be intermittent.

Expect almost all your technology to malfunction from time-to-time

Because it will. Keep calm and grab the backups from the (ready-to-go) go-bag. Low-tech backups for high-tech items are nice, btw. Remember those AOL free trial CDs that used to come in the mail once or twice a week? We had to use one of them to regain internet access at one point early in the response (long story)!

Receiving and disseminating facts is a key job for everyone working a disaster. Just like in the point above, have backups. Worth noting for crisis communicators: during Katrina, (The) Facebook was only available (barely) to people with a “.edu” email address; YouTube had only been live a few months; Twitter did not exist; texting was hilariously difficult (compared to now). All those communication platforms (and more, like cell service and email) might be inaccessible to you at a disaster nowadays, too. Be ready to improvise.

You’re not at your normal job

Check your ego at the door

People at responses might often be assigned to large command posts, but the real work is done in small groups (span of control, for my fellow ICS nerds). Just because you’re the boss or a super star at the normal job (see above), doesn’t mean you will be during a disaster response (especially because so many of them are joint-organization efforts). Simply, nobody has the time to care about your résumé, except the parts that pertain directly to the tasks at hand.

Lead and follow, or get out of the way

If you’re put in charge of people and tasks, take charge! You don’t have to be a jerk about it, but there’s an interesting phenomenon that has occurred at every single incident I’ve worked – if people aren’t told what to do, they do nothing (or, have to guess at what to do – dangerous). Everyone – from the incident commander on down – ultimately has a boss, though. Being a disciplined follower is just as important as being a fair and firm leader.

Be prepared to be pushed to your physical endurance limits

Remember finals week from college? Boot camp? Training for a 10K? Late nights at the office to meet the deadline for a big project? Disaster response can be harder, physically, than all those things (even if you’re mostly working at a command post). After a few days of 15+ hour work days, you’re spent; after a month of them, you’re more fatigued than you’ve ever been. Keep yourself in at least reasonably good physical shape if there’s a chance you’ll respond to disaster. Take care of yourself while you’re at the incident. I never worried about how much I was sweating in the (give or take) million-degree Gulf Coast summer heat and humidity during Katrina – I worried when I stopped sweating!

Know who’s really stressed out while working disaster response operations? Almost everyone. It can be hard, at times, but positivity and kindness on your part can be contagious – and it’s a lot more rewarding to work with groups of people with their eyes on the prize and esprit de corps than to work with a bunch of grumps and complainers. Paul wrote about the mental fatigue aspect of response operations not long ago.

(Bonus points if you got my headline/pulled quote reference!)

2 thoughts on “Ten Years After: How Katrina Made Me a Better Crisis Responder”