I’d never heard of Lt. Gen. Jay Silveria, Superintendent of the U.S. Air Force Academy, before watching this video almost two weeks ago, but I can say this now – if he handles every potential (or real) crisis like he handled this one at the academy, he’s one of my new heroes. Just go ahead and watch how he reacted to racial slurs being written on dormitory room message boards and then we’ll chat about how many communication points he got right:

First things first: if we can agree on the following formula, we can start to unpack some of the things Silveria did correctly, within the many communication peculiarities that fall under the crisis communication umbrella.

Crisis = Issue + Emergency x (Other Factors [e.g., negative media attention, stakeholders not trusting the organization or not thinking it is credible, etc.])

If you remove anything from the second half of that equation (everything past the “=”), odds are that you will NOT find yourself within a crisis. Also, let’s address the word “issues.” It sometimes has negative connotations. Here, think of it defined as, “topics of shared interest with various stakeholders which require continuous maintenance and vigilance to ensure standards are met.”

In this case, we could define the Air Force Academy’s issue as: operating a learning institution at which all cadets are treated with respect, regardless of color, race, creed and other personal characteristics. The emergency is a violation (really, several violations) of that expected and desired operating status. Here’s how Paul elegantly defined things right here on the blog years ago:

For our purposes, we define crisis as a situation in which public and stakeholder reaction to the fusing of an issue and emergency impacts operations and threatens the long-term future of an organization. It is a major turning point in the life of an organization, threatening to result in permanent and drastic change.

Why this didn’t become a crisis is because Silveria and his staff eliminated the other factors in the equation above before they could occur. (Imagine media attention, for example, if they had tried to ignore or hide the incident, hoping that it would just “go away,” and the story broke anyways. We’d be talking about a scandal instead of a high-ranking military officer doing the right thing, for the right reasons at the right time in the right way)

Here’s (just some of) what Silveria and his staff got right:

There’s so much more, but I’ll leave you with that. If you’re a professional communicator, I’m sure you can come up with five or 10 or 15 more “did it right!” things about this. Silveria’s speech is just an early step in mitigating potential crisis, of course, because he and his staff will have more work to do on the subject.

Save this video. The next time you talk to The Big Boss about what he or she should do when communicating bad news, play the video and just say, “This. This is what you should do.” 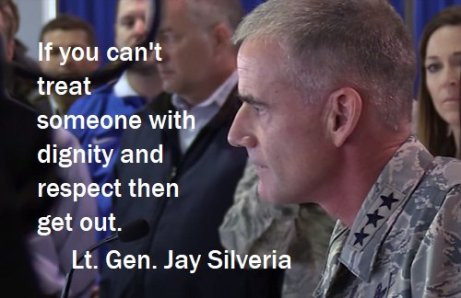