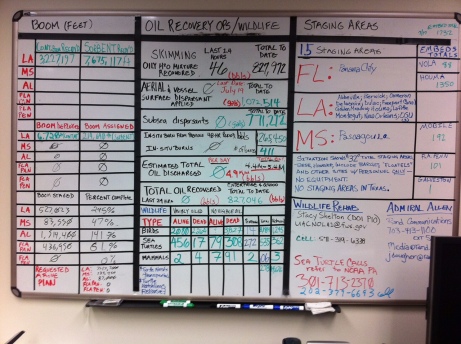 The Real Deal: a JIC status board during the Deepwater Horizon Gulf of Mexico oil spill in 2010.

A Joint Information Center operating at full tilt is a precise and frantic thing:

Tracking and categorizing all of this fluctuating data into any semblance of something useful is a challenge, and that’s when the Status Board Specialist (SBS) rides into battle.

If you’re using the U.S. National Response Team JIC Model (or a model that closely resembles it), the SBS is assigned by the JIC Manager, reports directly to the Assistant Public Information Officer (APIO) for Information Gathering and is essentially responsible for displaying incident information in the JIC, feeding all those JIC members, listed above, who have a constant need for verified facts.

If you have someone on your JIC staff who, shall we say, “exhibits pronounced organizational tendencies,” such as color coding the clothes in his closet from light to dark and arranging the items on his desk for maximum efficiency, thinks fast on his feet, possesses some public affairs and Incident Command System (ICS) experience, is able to work quickly and with minimal direction and functions efficiently in a high-stress environment — by all means, give him the tools he needs to externalize his magnificent gift and step back (stepping in again only to course correct, as needed.)

As with any ICS position, SBSs need to be assigned to this position based on training, experience, skills and ability, not rank or employer.

The status board is a place where unchecked facts gan gain ground and become gospel in a hurry. Guard that board like a seasoned ice hockey goalie!

If you are the JIC Manager, your job is to provide the SBS with final and approved copies of news releases, fact sheets, current command messages and talking points. The SBS’s job is to organize everything you give him. Ideally, the status board(s) should be on the longest wall in the JIC, someplace where it can be protected from accidental smudges (shirt sleeves of passers-by) or “helpful” (read: unapproved) edits by third parties. The status board is a place where unchecked facts can gain ground and become gospel in a hurry. Guard that board like a seasoned ice hockey goalie!

The Pros and Cons of Leveraging Technology

While it’s important to leverage available technology to make the job easier, consider this: electronic displays are required to have an archived backup and a hard copy. That’s a lot of early purchasing and IT involvement. Unless you’re an oil, chemical or shipping company with reasonable expectation of these types of incidents on the regular (and you already have a permanent JIC in a bunker somewhere), you probably won’t have ready access to such resources and you probably shouldn’t waste time waiting for such miracles. If you anticipate the incident not lasting more than a week or two, take the easy route: giant Post-its and dry erase boards.

Paper is easily replaced when it’s no longer needed; date/time stamped, folded up and handed over to the Documentation Unit Leader (DOCL). Likewise the dry erase boards — photographed as needed, the images printed and identified for DOCL. (Remember: everything you generate while working in an incident management team is a legal document.) You probably could have two specialists working in tandem if the operational tempo calls for it, but you definitely should if you’re working a 24-hour operational cycle. Call for the cavalry early. It’s also a good idea to establish a quick pass down between shifts.

The SBS needs to keep his head on a swivel and the JIC well-informed. He provides to-the-minute updates of the response voice and the board needs to be accurate. All of this very legible data needs to be big, bold and clear to the people on the phones and easy-to-understand for anyone entering the room. I can’t stress this enough.

Your SBS needs to track everything just shy of the positions of weather satellites in orbit, starting with the Wi-Fi password, the agreed-upon response name and the URL where your releases will post. One entire panel needs to show the complete and up-to-date organization chart of the JIC, the “Who’s Who in The Zoo.” Capture (and immediately verify!) the JIC phone number as soon as you have a land line, and include the not-for-release numbers of anyone working in the JIC, as well as the agency they represent and what hours they’re available.

Stuff that isn’t going to change much should be on paper: Phone numbers are a good example of that. I was at a response years ago where an energetic new JIC member erased a section of the unrecorded status board immediately behind his chair for his own use, successfully eradicating some rather important knowledge and other key data, which took a few hours to replace.

All released information is fixed information. Track what’s been said, always. Print your releases and social media posts, get them approved, signed and handed over to the SBS for inclusion on the wall, with the newest version on top. While you’re at it, number your headlines: 001, 002, etc., anything to help keep the story straight or highlight flaws in your information flow.

You’ll want the Unified Command’s objectives translated into “quotable” talking points. Any planned media engagements need to include the names, affiliations and points of contact for those reporters (information which should be then duplicated on your growing press release distribution list!), the person being interviewed and the date, time and location where that will occur. Track the reports of on-site responder injuries. Track the names, the phone numbers and the projected locations of your Field Specialists and Imagery Gathering Specialists so you can better coordinate media field opportunities (and take good care of your people!). Capture the details of VIP visits and the details of the coordinating Liaison.

… when you’re looking at a sheer wall of information, you need the really important stuff to stand out.

Things that change often belong on dry erase boards: Any river, road or port closures will come into question repeatedly, as well as their projected return to operational status, especially since they represent a halt of local economic lifeblood to the area. Create a grid on the board for the numbers and types of impacted wildlife — as well as wildlife believed dead by natural causes. Make sure to capture the wildlife rehabilitation and claim numbers as they become available and put those in a different color. Seems like a no-brainer, right? Well, when you’re looking at a sheer wall of information, you need the really important stuff to stand out.

Track the response assets on-scene. “How many people are working on this response? How many boats do you have out there? How many helicopters?” Somewhere in one corner of that dry erase board should be the very visible words AS OF in a box and followed by the time of the last addition. Statements such as, “Yes, ma’am. These are the figures we have as of noon today,” go a long way toward establishing your credibility if you’re a Community Relations Specialist using facts from the status board to answer stakeholder questions. If a question is asked of your Media Relation Specialists more than twice, post the vetted answer on the wall and alert the room of the update. If there’s a rumor going around, start a list with two columns — one for the rumor and one for the source and answer.

Create a rough timetable of events (as they become known) and verify it with your Situation Unit Leader. You can probably expect a demand for that by Day Two of an incident, as the response story turns into a recovery story. “What happened, and when?”

Use units of measure that normal people can understand (which may differ greatly from units of measure used by industry type X). For example, release oil or chemical spill numbers in gallons only. (“But our lawyers said to –!”) I know, barrels are a lower number and that makes the spill seem smaller. This is all about communication. The average person knows what a gallon looks like. When you start posting (or releasing!) your spill in both gallons and barrels, things get confusing fast and your leadership will quickly find themselves under the glare of some very ugly spotlights.

For numbers in high fluctuation such as wildlife fatalities, verify those figures with a Situation Unit Leader at least twice a day and plan to release those changes in bullet form first thing in the morning and again in the last release of the day. (Hint: If you’re churning out a new release each time a single number changes, you’re going to overwhelm your audience, burn out your staff, tie your face into knots and leave yourself wide open to version control complications and accusations of incompetence.)

Your SBS must constantly review and confirm the contents of the board and know from where those facts came. Bottom line: If you can think of it, track it (until you don’t need to, and then label it and give it to DOCL.)

When is the status board done? When is it perfect? The short answer is “never.” Perfect is the process. But when that salty, battle-tested Situation Unit Leader with the alligator skin, cowboy gait and shock white hair from years of harrowing response experience ambles into your JIC on day two, puts his hands on his hips, nods appreciatively at your carefully groomed brain center and declares that you’ve got a better board than he does, you’re getting it right.

2 thoughts on “JIC Status Board Specialists: Librarians of Organized Chaos”