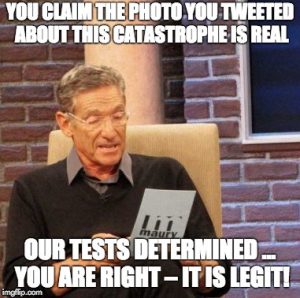 In the previous post in this series on the integration of social media and operations I outlined some of the things managers can do to contend with the overwhelming volume of information social media provides. The most significant takeaway is the practice of narrowing social media searches based on the type of hazard and the gaps that exist after establishing situational awareness using traditional methods.

Once a manager does that, she has a lot less data to analyze, but it still has to be validated. This is no different from the requirement to verify data mined from traditional sources, but there’s an extra burden with social media to validate the source before verifying the information that the source is providing. The methodology for moving data gleaned from social media from the information column to the verified fact column is an ongoing challenge, but here are a few recommendations for doing just that:

Use geotag information to confirm whether a post originated in the impacted area.

A geotag is geographical data, usually latitude and longitude, that social media users can add to imagery or video they capture and share. Many applications used for capturing imagery on smart phones will tag an image with lat. and long. automatically. Geotags might also include: altitude, bearing, distance, accuracy data, place names and time stamps.

How does this information help managers move social media data from the information column to the verified fact column?

Lets say there’s a tweet about previously unreported flooding in a particular neighborhood in the aftermath of a severe storm. Examining the geotag information of that tweet can validate whether the source tweeted from within the impacted area. If there’s an image attached to the tweet, the image’s geotag information can tell you if it was captured from an area that makes sense (i.e., within the area impacted by the storm). Furthermore, you can use geotag data to search for other posts coming from that location to get a better, more verifiable, picture of what’s really happening on the ground.

Use social media monitoring tools to search for and assess posts with similar information.

If the unreported flooding post is a one-off, then it’s obviously less actionable – but, the more similar posts you see, the more valid the data becomes. The key here is to assess the number of original tweets not the number of retweets. If the original tweet is being retweeted dozens of times, it doesn’t necessarily make that information valid. It’s tantamount to hearsay. But if you’re seeing seven or eight separate tweets reporting a similar hazard in a similar location, you have enough to justify assigning resources to take a closer look.

Use “reverse image search” tools to validate the authenticity of imagery.

If you do a Google search for the image below, you will get approximately 25.2 billion results. 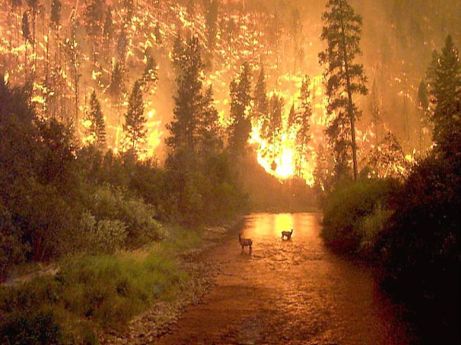 Many, if not most of you, have seen this iconic image at some point for two reasons: it’s amazing and, more important to this topic, it’s nearly 20 years old.

The photo was shot August 6, 2000, by a fire behavior specialist on loan from an Alaska-based incident management team crossing the Bitterroot River near Sula, Montana.

Online tools such as TinEye allow you to investigate where an image first appeared and where else it appears online. Google also has a simple reverse image search function you can use on computers or your mobile phone. A quick reverse image search will help you figure out if that photo of an oiled sea otter being attributed to your operation is the real deal or a carryover from the Exxon Valdez response. It happens.

Use people who know more about this than you do.

As with many, if not most, of the best practices in emergency management, this falls under the category of preparation – that which is done before something bad happens. The Social Media Working Group for Emergency Services and Disaster Management – or SMWGESDM – suggests in their white paper, “From Concept to Reality: Operationalizing Social Media for Preparedness, Response and Recovery,” partnering with organizations such as, but not limited to, the Association of Public-Safety Communications Officials (APCO), the National Information Officers Association (NIOA), the International Association of Fire Chiefs (IAFC) and the International Association of Chiefs of Police (IACP) to help implement best practices for identifying relevant and accurate social media sources. These organizations also have their own network of local contacts and resources which a state or federal incident commander can tap into for insights on the best ways to gather and verify information.

Lastly, as long as we’re talking about working with people who know more about this than you do, use VOSTs. VOST members are situational awareness and common operating picture force multipliers. The best of them combine an intimate knowledge of emergency management operations, with expertise in using Internet and social media monitoring tools to mine all the relevant data an incident commander, planning section chief and/or situation unit leader could ever want, from the deluge of online information created by a critical incident.

It’s a mystery to me that the VOST concept hasn’t been more readily embraced in emergency response doctrine across the board (Editor’s Note: We’ve been advocating the concept for years), but I can only assume the reason is the same as the reason social media has yet to be fully embraced – there’s still a lack of an unclear alignment with existing processes and doctrine.

… which is a nice place to segue into our next – and final – post in this series: on strategies for aligning social media integration with existing processes and protocols.