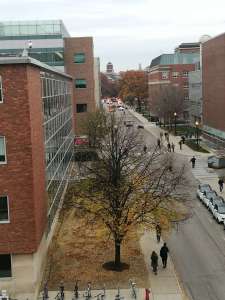 When a then-unidentified man used his vehicle as a weapon on the campus of the Ohio State University Monday, then got out of it and attacked people with a knife, authorities acted quickly: both the first responders who stopped the violence within minutes and school officials responsible for ensuring the safety of students, faculty, staff and visitors to the campus.

Ohio State should get high grades for using social media in emergency management (SMEM) tactics and techniques to help keep people on campus safe and inform off-campus stakeholders of the quickly evolving incident and its conclusion.

Here’s a few lessons learned for you to consider when doing SMEM planning for your next critical incident:

Be the first and best source of information:

During public safety incidents, give clear instructions in a timely manner:

Rely on third-party support, through relationships developed before crisis strikes, to help get important information to the people who need it (NOTE: I didn’t have to search for all the tweets embedded here – I follow some individuals/organizations with ties to the school, and most of these embeds were retweets that popped up on my personal account timeline):

Praying that everyone is safe and secure near whatever is happening at OSU. School tweeting active shooter near 19th and College

FWIW for anyone who doesn’t know where to get more information about Ohio State, I’m following @TheLantern and @hollyzachariah for updates

The news media will quickly begin releasing information when they get it:

The shooter was killed at the scene Multiple Injuries In Ohio State University Shooting | … https://t.co/yGHIbsTNFd pic.twitter.com/MG7TmaRWtS

BREAKING: Hospitals say they are treating 8 patients from Ohio State University attack, none have life-threatening injuries.

NBC4 here in Columbus interviewing a guy whose girlfriend is currently inside bathroom at Watts Hall.

Man, this is awful.

One @OhioState professor tells @NBC4 a colleague was slashed with a machete on the OSU campus in Watts Hall. #Breaking

Consider non-traditional news sources when building your engagement list – they’ll be reporting on your critical incident:

Voices other than those of officials and the media add to the narrative on SM:

This is the area police are saying the incident occurred. pic.twitter.com/PVLYkkw64v

Make sure leadership engages, when the time is right (in this case, after the emergency phase):

Thoughts and prayers with those injured and their families. We remain unified in the face of adversity. https://t.co/0hkMkQuMvE

Keep providing information until the critical incident is resolved:

UPDATE: All buildings EXCEPT Student Academic Services are open to retrieve personal items. 19th Ave still closed. Use 18th or Woodruff for

UPDATE: All classes on the Columbus campus will resume normal schedule as of Tuesday, November 29th.

#BREAKING: Ohio State University Police confirmed the scene is secure, shelter in place has been lifted.

If you’re at a large institution, like Ohio State, empower business units to release vital, specialized information via branded, non-emergency channels (and, understand that SMEM activities extend into the recovery phase of operations):

The @OSUCCS counselors will be in the Performance Hall in the @ohiounion and in room B145 of the RPAC all day today @OSURec.

Understand that SMEM and social media is just one way to pass critical information:

If an organization like yours is mitigating crisis, your stakeholders will want to know what you’ll do if a critical incident strikes your organization. Tell them, but wait until after the emergency is over at the similar organization:

In light of today’s Ohio State incident, we’d like to remind you how @WWU
prepares for campus emergencies. https://t.co/JmBF8fj0wW pic.twitter.com/SD7o0MGzL2

Photo by Addis Wang. The original image has not been altered and is used under Creative Commons license.